Sat Aug 1st Up in Norway: One of the first cruise ships in the world to resume sailing since the coronavirus-caused worldwide halt to departures in March is experiencing an outbreak of the illness that has already sent people to the hospital.   Norwegian expedition cruise company Hurtigruten said late Friday that four crew members from the 535-passenger Roald Amundsen were admitted to the University Hospital of North Norway in Tromsø earlier in the day after the vessel docked in the city.

Rumor Mill:   Cunard had announced that the Queen Mary 2 would resume sailing in Nov, but now we’ve “heard” that it might not be until next spring.   Yes, if true, the 2,600-passenger Queen will have had a year off duty!

Sun Aug 2nd From Over in England:   Our man with a camera & longtime staffmember onboard British liners Dave Townson has sent this photo (on Saturday) from Weymouth Bay.  Hard to see in this version, but I count 6 big liners sitting quietly offshore and at anchor.  Included are the Britannia, Queen Mary 2 & Carnival Valor.

Below:   The AIDAperla laid-up in Hamburg

Mon Aug 3rd Update from Norway:  Update:  Thirty-six crewmembers aboard Hurtigruten’s Roald Amundsen have now tested positive for COVID-19, according to the line. The Norwegian small-ship expedition cruise and coastal ferry operator had initially confirmed four cases of COVID-19 aboard Roald Amundsen on Friday. By Saturday morning, that number had risen to 33 following the testing of all 158 crew aboard the expedition ship. On Saturday afternoon, Hurtigruten revised the numbers of COVID-positive crew to 36. The remaining 122 crewmembers have tested negative.

Below:   In more tropic waters & of course in pre-pandemic times, 6 cruiseships gather at St Maarten.  An estimated 21,000 passengers were visiting that day!

Next to Go!  Royal Caribbean’s Empress of the Seas, now thirty years old, has reportedly left Southampton and was headed for Malta.  Some reports say it is a prelude to the  ship going to the scrappers. 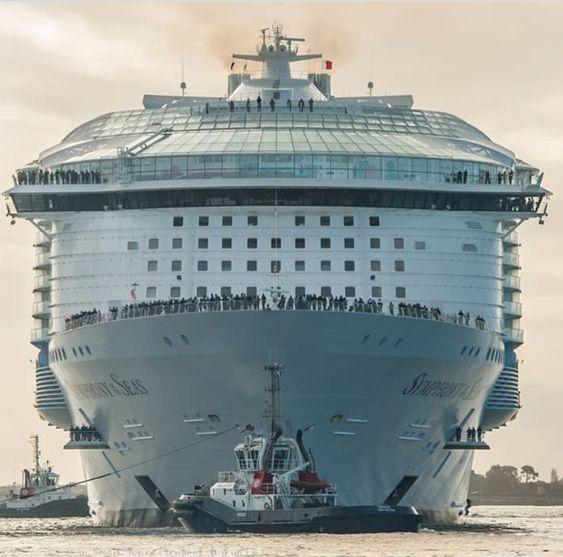 Tue Aug 4th  Polynesian Waters!  The French Polynesia-based, 332-passenger Paul Gauguin returned early to its home port of Papeete, Tahiti, over the weekend after a passenger tested positive for the illness.  The vessel, operated by Tahiti-based Paul Gauguin Cruises, was just three days into its first sailing with international passengers since cruise lines around the world halted operations in March.

Another One Sold!   Carnival Corp has sold off yet another member of its fleet,  Costa Cruises’ Costa NeoRomantica, to Greek-owned Celestyal Cruises.

More Second Thoughts, More Cancellations!  AIDA Cruises won’t be sailing in early August as Carnival Corporation’s German brand announced it had cancelled departures on the AIDAperla on August 5, August 8 and 12, as well as the August 12 sailing aboard the AIDAmar.  AIDA said that despite intensive prep work and the support of national and international authorities and health experts, it did not receive approval from its flag state of Italy, which it said was still pending.

Photos from Weymouth Bay:  Once again, our good friend Dave Townson has sent these two fine photos (below) from Mon afternoon – the Queen Mary 2, Queen Elizabeth, Britannia, Azura & others.

Below:   The stern section of the Navigator of the Seas

Wed Aug 5th Update from Germany!   Another kind friend Dr Konrad Rippmann over in Hamburg sends this report:  Good news: TUI cruises just finished their first 3-night round-trip on the North Sea. After Mein Schiff 2 returned, a good friend, who was on board, praised the very relaxed athmosphere: Instead of 2,900, only 1,200 passengers shared decks and restaurants. The strict hygiene measures seemingly did not disturb the joy beeing back at sea!

Above:  An empty cruise ship sitting at anchor …

Return!  Costa Cruises has said it is waiting for the final sign offs from authorities to start operations with its new “Costa Safety Protocol” system in place.

Aegean Waters:  Greece has reopened six of its main ports to cruise ships for the first time in the coronavirus-shortened tourism season, but no ships are expected before three weeks.

Start Up!  MSC Cruises Returns!  From Aug 16th, the MSC Grandiosa will offer 7-night cruises from Genoa visiting Civitavecchia, Naples and Palermo in Italy and Valletta in Malta.   From Aug 22nd,  MSC Magnifica will offer 7-night itineraries from Bari and Trieste,  calling at Corfu, Katakolon and Piraeus.  Over the past months since temporarily halting its cruise operation in connection with the development of the global health pandemic ashore, MSC Cruises has been hard at work to develop a new health and safety operating protocol to support its return to service once the time is right. New operating procedures are designed to meet and exceed guidelines provided by national and international health authorities like the European Centre for Disease Prevention and Control (ECDC) and will be put into place both before and after boarding the ship. Among the measures:  Health screening for all guests, including a mandatory health questionnaire (sent in the cruise ticket), a contactless temperature check and COVID-19 screening. New sanitation methods including electrostatic sprayers to kill bacteria and viruses and use of hospital-grade disinfectant products. Daily contactless temperature check for all guests during the cruise. Newly designed activities with smaller group sizes will be introduced with themed events, fun games, kids and family activities, talent shows, fitness, dance and more. Service will be adapted to respect social distancing: all meals and drinks will be served to guests at their table. At the buffet restaurant, self-service will be temporarily unavailable and the food will be plated and served to guests. Based on the current regulations, all guests will be required to get MSC excursions to go ashore.

Above:   The towering Ovation of the Seas …

Below:  San Juan in bygone days …

Thu Aug 6th:  Further Shutdown:  Consistent with the decision announced today by the members of the Cruise Lines International Association (CLIA) to voluntarily extend the pause in U.S. cruise embarkations until Oct 31st, Carnival Cruise Line has informed guests and travel advisors that they have cancelled all cruises scheduled to embark between Oct 1st  and Oct 31st.

In Contrast!  According to the World Tourism Organization (UNWTO), 40% of all destinations worldwide have now eased the restrictions they placed on international tourism in response to the COVID-19.

Tragedy & Loss:   That huge explosion near the waterfront of Beirut last Tue has an added loss:    The 280-passenger cruise ship Orient Queen II (below), berthed in the port, has capsized.   The 7,500-ton ship, built in Spain in 1989 for Spanish owners as the Vistamar, joined the niche Lebanese cruise operator known as Abou Merhi Cruises.   Their cruise business was in Eastern Mediterranean itineraries.

Future Plans: Two MSC Cruises ships about to start service in the Mediterranean should grow to 14 ships in service by this coming winter, while the company has no plans to retire or sell any ships.

Fri Aug 7th   Like a Checker Board — Changing Locations: In recent days, Norwegian Cruise Line Holdings’s cruise ships have quietly departed from most US ports except, for the moment,  Los Angeles. Currently, five of Norwegian Cruise Line’s ships, Norwegian Epic, Spirit, Dawn, Encore & Bliss, along with two from Oceania Cruises and one from Regent Seven Seas are all in the Atlantic heading to Europe.

The parent company of Norwegian Cruise Line, Oceania Cruises and Regent Seven Seas Cruises had been very successful at finding docks for its ship while other cruise lines kept their ships at sea. This strategy led to cruise ships appearing in some unusual ports earlier in the year. Ports ranging from Eastport, Maine to Portsmouth, Virginia; Fernandina, Florida; and Oakland, California all provided locations for the cruise ships.

The Rock of Gibraltar:   Many of the cruise ships that are en route to Europe will stop in Gibraltar,  which has been permitting fueling and provision calls. Because  US  authorities were not permitting crew to go ashore,  Norwegian is also using these repositioning trips as an opportunity to return additional crew members to Europe and complete crew changes for those at the end of their current contracts. Two of Norwegian’s ships are currently bound for Sweden for this purpose.  It is understood that the other ships will be proceeding to ports such as Marseilles and Genoa for lay-up. Some of the ships may also use the opportunity to undergo routine maintenance at the European shipyards.

Fond Farewell!  By positioning the ships outside the US ports, the cruise lines also have not been subjected to the restrictions placed on crew and movement. Carnival Corporation took a similar strategy moving all of its ships away from US ports and saying they would mostly stay outside the American ports for the foreseeable future. As such, Carnival was not involved in the CDC’s color-coding system controlling crew movement on and off the ships.   Residents, such as those in Eastport, Maine, were sorry to see the ships depart and some even went to the dock to provide a final sendoff to the cruise ships.

Distant India!  The Indian Government announced plans to permit cruising to resume starting Oct 1st  as part of its “Mission Begin Again” initiative designed to restart the economy. The decision comes as the country continues to work to control COVID-19 having just recently announcing that the number of cases might be plateauing and that the mortality rate has begun to decline.

Taking advantage of the decision to permit cruising to resume, India’s only large ocean-going cruise line, Jalesh Cruises, announced plans to resume operations on Nov 6th. Founded just last year, the company was working to build India’s domestic cruise business when the pandemic struck. The company’s one cruise ship, the Karnika, has been in India since March,  but was detained in the late spring in a dispute with its bunker supplier over unpaid bills.

Above:   The 70,000-ton Karnika was first commissioned in the summer of 1990 as the Crown Princess for Princess Cruises.   The 1,950-berth ship was named by Sophia Loren at a pier in Brooklyn Heights, New York and then sailed on a mini-cruise to Pier 88 in Manhattan.  Afterward, she often changed hands – becoming the A’Rosa Blu for Germany’s Arosa Cruises, then the AIDAblu for Aida Cruises, the Ocean Village II for Ocean Village Cruises and, until 2019, as the Pacific Pearl for P&O Australia.

Troubled Pacific Waters!  This week, cruise ship and casino operator Genting Hong Kong warned that its losses for the first half of 2020 will be “significantly higher” than the same period last year, primarily due to the coronavirus outbreak. In 2019, the firm’s losses in the first half totaled $55 million.  The COVID-19 pandemic has disrupted the operations of virtually every passenger vessel firm, and Genting is no exception. Its cruise ships World Dream, Genting Dream, SuperStar Gemini, SuperStar Aquarius and Star Pisces all halted operations beginning in January and February, and Genting only restarted service in Taiwan in late July.   The company also owns its own shipbuilding operation, German shipyard conglomerate MV Werften, which was also forced to suspend operations due to the pandemic. Two vessels under construction – the Global Dream and Crystal Endeavour – will be delayed by a year due to the shutdown.

Genting’s casino and nightclub businesses in Manila and Singapore have also suffered. Last week, Manila doubled down on its coronavirus prevention measures with a return to lockdown, and Genting’s Resorts World Manila development will have to remain closed for the near future.

In response to the financial pressure, Genting has announced an executive pay cut, a series of layoffs and furloughs, salary cuts, capex cutbacks, a debt deferral agreement and a layup program for its idled ships.

REMEMBER THOSE SAILING DAYS & THE EXCITEMENT OF THE VERY BEGINNING OF A SEA VOYAGE!